A graduate student in musical theater and opera, Yophi Adia Bost wanted to appropriate the art she shared.

Bost said she had this chance as part of the Cabaret color of the School of Music, Dance and Theater.

“We are so often assigned roles to play that are written for people of color, and nine out of 10 of those roles present us as underdogs or hide us as background characters,” she said. .

Over the past several years, ASU Musical theater and opera program hosted small student-run cabarets for the Tempe Center for the Arts’ “Edge” series. One of the cabarets, known as Color Cabaret, centers on showcasing the work of students, composers, and writers of color, as well as creating roles for or reimagined with artists of color.

“The Color Cabaret has become an anticipated tradition of hope, vulnerability and freedom within the program,” said co-student directors Jonice Bernard and Reem Soliman, both musical theater majors. “We’ve helped create a community of artists who bravely stand out and champion underappreciated and discriminated groups – where we can all tell our stories, discover our beautiful similarities and differences, and create lasting change.”

Bost was thrilled to be part of Color Cabaret this year.

“It’s so liberating to be able to choose whether or not those roles are for me and to own the art that I choose to share,” Bost said. “As a music educator, I believe few things have the ability to validate students’ cultures and give them confidence in their cultural identities quite like music.”

COVID-19 prevented a live event for 2021, but the cabaret was able to include over a dozen students with a live band and record performances for an event streamed online. 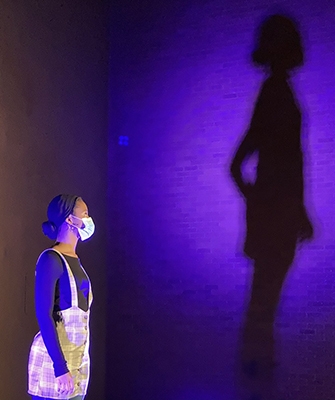 “This year was pretty tough because we had to figure out not only how to run a cabaret with twice the cast of last year, but also how to do a high-quality film version,” Bernard said. “We also wanted everyone to be able to sing without a mask, so we had to choose a location for the actors that was 6-12 feet away.”

Each student who chose to perform was encouraged to bring the music they felt was most authentic to themselves, regardless of genre or language, so the cabaret would be a place for artists to perform. without limits, according to the co-directors.

“I wanted to be part of Color Cabaret because I had wanted to play music from my country, Brazil, for a very long time,” said Bruno Streck Rodrigues, a Master of Music in Performance student who graduated in May. “I wanted to not only elevate and spread the beautiful music we have in Brazil, but also shed light on the atrocities that have happened there because of the current oppressive government. BIPOCThe acronym BIPOC stands for Black, Indigenous and People of Color, but is also generally understood to include all other non-white ethnicities. Brazilians, women and LGBTQ+The acronym LGBTQ+ stands for lesbian, gay, bisexual, transgender and questioning and/or queer, with the plus symbol representing all other sexualities and gender identities, including but not limited to intersex, asexual and allies. Brazilians.

The Color Cabaret creative team was formed through personal connections, friends and colleagues from across ASU – a community of color creators in all areas of musical theater and opera.

“It was my first time working with a creative team made up entirely of women of color, which was one of the most empowering and empowering experiences of my graduate school,” said Kiernan Steiner, music director and Ph.D. in Musical Arts to Student in Choral Conducting, graduating in May. “I wanted to be part of Color Cabaret because I wanted to support the creativity and artistry of BIPOC and underrepresented students at the School of Music, Dance and Drama.”

The Color Cabaret in February earlier this year and the Alumni Cabaret in October 2020 both helped raise over $5,000 for scholarships for students of color. Both events were sponsored by the Musical Theater and Opera Student Organization, which is led by the Student Leadership Team. The BIPOC Scholarship Fund is still accepting donations to ASU Students and Alumni for BIPOC Scholarships.

“My hope for the cabaret in the future is to always be a space held safely and reserved for all BIPOC students in the musical theater program,” Soliman said. “So wherever they take this show, as they push boundaries and shatter expectations, that will forever be the true spirit of Color Cabaret.”