The remake of an outdoor performance space along the Atlanta Belt LineThe Eastside Trail is moving toward final design and construction in late summer.

The Reynoldstown Community Space is a small lawn along the trail between Memorial Drive and Fulton Terrace. The progress of the renovation, which includes wiring for plug-in performance and framing it with dune-like concrete sculptures, was showcased in a virtual meeting April 5 by Atlanta BeltLine Inc. (ABI), the organization that builds and operates the park, trail and transit loop.

The community space is at the back of the Muchacho restaurant at 904 Memorial. According to Miranda Kyle, ABI’s arts and culture program manager, the use of space for art and performance predates the BeltLine. She said it was once used for a “Burning Man-style” event with “carvings that were treated like effigies”. BeltLine’s programming has included a wide range of music, dance and other performances and exhibits.

In addition to wiring the site for electricity and sound, the renovation focused on creating some type of permanent large-scale artwork. This has been under development by the Boston-based Make/Do Studio since mid-2020.

Their initial idea was a pair of curvy sculptures that they described as ribbon-like arranged on either side of the path, giving the illusion of sinking below and emerging on the other side. This evolved into a third such sculpture in the performance area, giving an appearance something like the humps of a mythical sea serpent rising from the water. 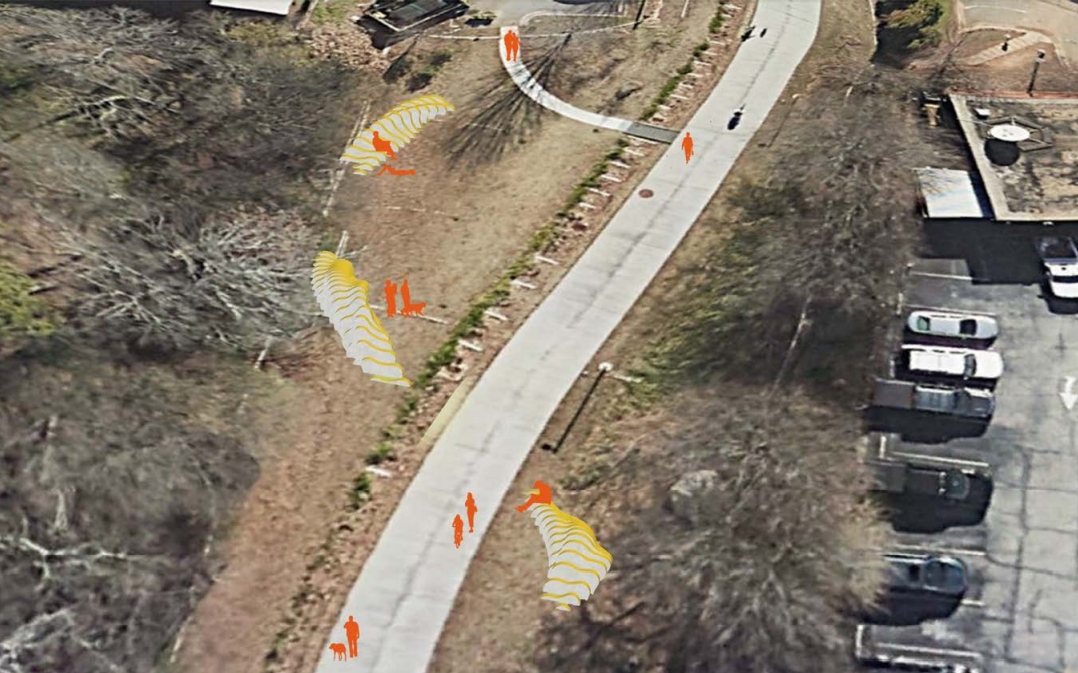 The sculptures would have elaborate surface curves, something like sand dunes, and would be made up of slabs of concrete painted yellow – considered the color of Reynoldstown, the designers said – on one side. The design would create an illusion of movement and changing surfaces as one walks past them.

The design was refined at an on-site event last month where designers stacked white boxes to give the public a sense of scale, and people could model Play-Doh on a map to suggest the location of the sculpture.

The sculptures aren’t designed as seating per se and don’t appear particularly comfortable, but, according to the designers, they will be built to allow for such contact and will meet playground safety standards.

“We anticipate people physically interacting with the sculpture, leaning on it, using it as a bench,” said Braxton Tanner of Make/Do.

One person from the low-attendance virtual meeting said more seats were needed there and all over the BeltLine. ABI spokeswoman Jenny Odom later said the benches were part of all the organization’s plans.

Close-up of the design of the Reynoldstown community space sculptures. (Illustration by Atlanta BeltLine Inc.)

Another question was whether the ring would be closed during performances, as it looks like the audience might hang out there. Kyle said the idea was for “small and intimate” performances and noted that the area had a natural barrier in the form of a plant-covered stormwater ditch along the path. There would be public notice of anything closing the runway, she said.

Another unknown is the alignment of the BeltLine’s light rail element in this area and whether it would affect the space. Odom said no roster has yet been chosen for this segment. Public transit doesn’t have to run directly along the trail and in many places in town it probably won’t. “Every element of the space will be taken into consideration when it comes to transit,” Odom said.

The designers are in the process of finishing their plan so that it can enter the engineering phase. “We are going to leave [the] community once the design is final and to give an update on the construction schedule,” Odom said.

For the full presentation of the meeting, see the ABI website.