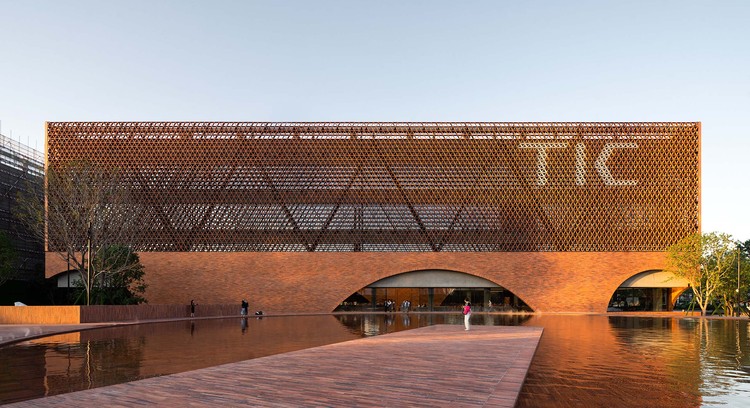 Text description provided by the architects. TIC Art Center, as an iconic symbol that represents the city’s image of makers, received a total investment of about 180 million yuan. DOMANI was invited to carry out the overall design of the project, with a design scope covering landscape, architecture, interior, products, etc. Meanwhile, industry-leading resources are brought together to create top-notch work with high integrity, high standards, high academic and commercial value, and high urbanity, which is rarely seen in the real estate industry these last years. The project becomes a success, indicating that Times China is embarking on a new long-term development journey focusing on refined products.

The landscape, prelude to the building, exudes a magnificent atmosphere. The design team divided the landscaped circulation path into upper and lower levels. Red ceramic bricks were used to create a sense of ceremony and provide a clear guide to the building for people entering the space from different directions. Meanwhile, the black gravel-paved garden provides a more open and free space to stop and rest, giving visitors another option for various experiences. The upper and lower levels are intertwined to create a rich, multidirectional and intuitive experiential journey. On the other hand, the iconic Round Pool, which is one of the largest man-made waterscapes in Guangzhou and Foshan, has become the destination of many visitors.

The observation deck that extends to the middle of the swimming pool offers a panorama of the main facade of the building. The mesh-like double-layer curtain wall system is both the visual highlight and the technical center of the project. A unique grid masonry effect is achieved by combining traditional “ceramic bricks” with a modern curtain wall structural design. Equilateral triangular modules are assembled to form the mesh facade. Thanks to the hidden anti-fall nodes of the curtain wall, the unique aesthetics of the openwork masonry is ensured, while preventing damage and falling of the ceramic panels. Through industrialized production, the precision of the aluminum alloy concealed unit adopted for the ceramic mesh curtain wall is effectively ensured, while greatly improving its installation efficiency.

The inner-coated curtain wall adopts ultra-clear glass in its conventional economic size. Single glass parts with a length of 2200 mm widen the view from the inside and ensure quick installation. The thickened and laminated glass ribs avoid exposed frames, and the reduced width of the glass ribs increases the utilization of interior space. This structure emphasizes the transparency and invisibility of the glass curtain wall, creating a lighter background for the outer lattice curtain wall formed by triangular ceramic bricks.

The overall “passive design” of the building minimizes energy consumption through the double-layer curtain wall system (clay brick grid + cavity + insulated Low-E tempered glass) on the east, south and west facades. Compared with conventional curtain walls, the system reduces the heat conduction of the building by about 30% and estimates the cooling energy consumption by 30%, thus effectively improving its insulation performance. At the same time, the 240 mm thick side openwork brick curtain wall system forms a solar filter, preventing glare caused by direct sunlight while improving light softness through refraction.

The Big Dream is a set of large independent outdoor facilities designed by A&V. Its design is inspired by Earth Art and BDO fantasy, telling the metaphor of a great invisible giant or his vast dreams in freedom. The installations, particularly popular with children, contrast with the huge circular square to underline the conflict of ultimate rationality and pure artistic sensibility. The design intentionally reinforced its structure and material in addition to formal control, to provide a safe climbing miniature structure for children.

Interior functional planning focuses on the vertical organization of spaces in the main building, and the integration of hidden engineering into the architectural structure provides more opportunities for flexible mixed use during future operation. The reception area on the first floor emphasizes a transparent boundary between architecture and landscape. The interior design is based on the idea of disinteriorization. First of all, unlike traditional indoor lighting solutions, a large intelligent preset light film ceiling is adopted to achieve a balance between indoor lighting and outdoor daylight. This lighting strategy is similar to superior lighting control in photography, helping to create a strong sense of vastness in space. Second, the emphasis on architectural structure. The electromechanical and fire systems strictly follow the extension of their beam and column systems. Third, interior materials are directly derived from architectural elements, bridging between interior and exterior while significantly reducing construction costs and risks.

Once the harmonious integration of interior space and architecture has been achieved, the visual emphasis is to create rich spatial and sensory experiences for visitors. Therefore, the original series of lighting products inspired by clotheslines, commonly found in traditional dwellings, act as indoor art installations. It provides additional lighting for different areas and is widely used on the first floor. Visually intertwining curves soften the space and respond to the circles and arcs of the building and the landscape. The living room furniture explores the middle ground between the traditional “table” and the “side table”. Platforms of different heights with pre-integrated tracks respond to various dialogue scenes. The refined work of the stone manifests itself in the details.

The large bar counter breaks the boundary between waiters and customers, creating an open workspace through the integration of functions. The furniture design subtly highlights a sense of flexibility and order in space that benefits from the diversity of users.

On the basis of the fireproof technical plan which separated the front part and the rear part, a “valley” passage is built in the middle of the architecture. It creates a very deep and interactive cavity within the building. While separating the main volume of the exhibition building from the operational annex, it frees up an uninterrupted touring experience within the main building. Therefore, multiple functions and flexible modification of the building would be possible throughout its life cycle. The volumes of the main building and annexes are connected horizontally by girder bridges, offering visitors an unexpected bird’s eye view among the interplay of space, light and shadow.

From north to south in China, the color of clay bricks used in folk houses generally changes from dark to light. From the traditional use of humus to make clay bricks, which resulted in great loss of arable land and timber, to today’s large-scale industrialized production of clay and mud bricks fired, the genes of “brickwork” and “masonry” in Chinese folk architecture endure. transmitting. Of these, red bricks are especially used in popular buildings for their low cost. However, with the development of urban construction criteria, traditional brick and masonry techniques no longer meet the requirements of large-scale public buildings. To slow down the disappearance of traditional craftsmanship, it is necessary to deepen it and rethink an adaptable method. The red bricks used in the TIC Art Center were created using 25 sets of molds, resulting in rich specifications and finishing systems. The scale and proportion of the bricks have been upgraded from the specification of “hand bricks”, through iterative research on the six indicators, namely controllable condition of the kiln, material performance, applicable structure , process stability, production cost. Thus, the bricks were finally refined.

All interior designs and art installations are original works copyrighted by A&V. If plagiarism is discovered, A&V reserves the right to take legal action.